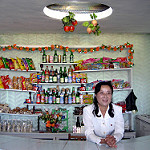 North Korea is starting to be noticed for something other than war, Stalinist-style control, and famine – it’s economic development. While officially there’s no private economy, the reality inside the hermit nation is different – and women are leading the charge, as Professor SeokHyang Kim, from Ewha Womans University in Seoul, told The Wire. (Image: David Stanley from flickr.com)