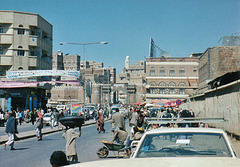 Earlier today in Sanaa, the capital of Yemen, a car-bomb killed 12 people and injured 12 more. The incident was another attempted assassination on Yemeni Defence Minister Mohammed Nasser Ahmed, he luckily survived.

This is all happening at a time where numbers of protesters are massing in Yemen, trying to strip former President Ali Adbullah Saleh of his diplomatic immunity… but are the protesters, notoriously non-violent, behind the car-bomb?