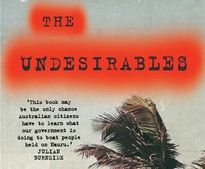 On Friday 19th July 2013, it was reported in the Australian media that over 150 asylum seekers had rioted and razed the Nauru Regional Processing Centre to the ground. Asylum seekers, Nauruans and Australian security forces were involved in clashes that left many asylum seekers seriously injured. Salvation Army worker Mark Isaacs was there, and in his new book, The Undesirables, he shines a light on the conditions which see grown men self-harm, attempt suicide and riot in desperate attempts to highlight their cry for freedom.