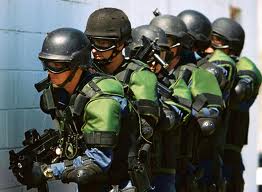 Director General of ASIO David Irvine has called for Australia’s terror threat level to be raised from medium to high. He believes extremist activity in Syria and Iraq poses a serious threat to our national security. Earlier today Australian Federal Police raided an Islamic center in the south of Brisbane after a reported terror threat. This has led Queensland’s Premier Campbell Newman to call for tighter security measures at the G20 Summit in November. So is the Director General’s position justified or is it all a bit of an exaggeration?