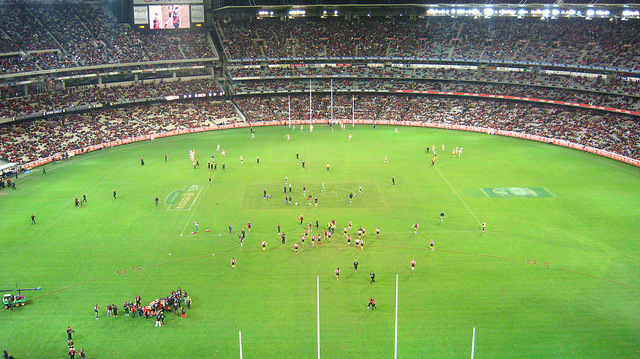 Play
Stop
Image: 'Before the match -- Essendon Vs Richmond, May 22 2010' by Nick Morieson on Flickr

Australia Football League (AFL) has had an anti-vilification law for 21 years.

A range of policies have been developed to improve the welfare and well-being of all AFL players, but the prejudice faced by Adam Goodes and others, has indicated the sport still has some problems.

Research released earlier this year, which involved more than 400 AFL players coaches and club staff, found that while on-field player-to-player vilification has been mostly eliminated, some forms of prejudice remain.

Download Audio
Produced By
Featured in storyDr Sean Gorman, Research Fellow at the Centre for Aboriginal Studies at Curtin UniversityLeanne Townsend, Chief Executive Officer of The National Aboriginal Sporting Chance AcademyKieran Murphy, President of the Glebe Gorillas Football Club
Category
Tags
Arrow Back to archive
Arrow Back to Monday
Share Facebook Twitter Twitter Tumblr
Other stories from this day:
You might also be interested in: