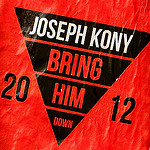 The world got sick of Kony 2012 very quickly. The short film was viewed by over 100 million people and then promptly faded into obscurity as the Cover the Night event flopped and the creator was caught yelling at traffic, half-naked. But the warlord is still out there, and there are still people trying to bring him to justice.

It’s been over a year since the Kony 2012 campaign briefly harnessed the outrage of the world. This week has seen two contradictory announcements about the hunt for the warlord: the African Union has suspended their search for him, and the US announced a $5 million reward for information  leading to his capture.