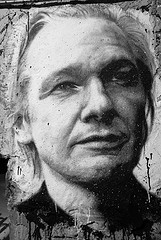 Play
Stop
(Picture by Abode of Chaos on Flickr)

WikiLeaks founder Julian Assange has taken refuge in the Ecuadorian Embassy in London after losing his fight against his extradition to Sweden, where he is facing charges of sexual assault. Ciaron O’Reilly is a long time anti-war activist who himself has faced arrest and imprisonment overseas. In 2003 he was arrested for damaging a war plane on its way to Iraq and was tried three times resulting in his eventual acquittal. Ciaron held a vigil in solidarity with Assange claim for asylum in front of the Department of Foreign Affairs in Brisbane on Wednesday. He and his fellow activist plan further action in support of both Assange and Bradley Manning who is currently detained in the US charged with passing classified material to Wikileaks.