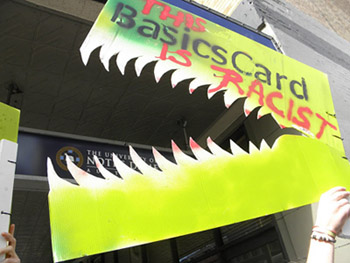 Welfare groups and residents in the southwest suburb of Bankstown have condemned a Federal Government plan to roll out welfare quarantining beyond the Northern Territory to five trial sites across Australia, including Bankstown in NSW, from next July.

The contentious policy, also called ‘income management’, was a central part of the government’s Northern Territory Intervention strategy introduced in 2007.  At a rally outside federal Minister for Human Services and Social Inclusion, Tanya Plibersek’s office in the Sydney CBD on Friday, members from a coalition of 40 Bankstown community groups called for a moratorium on income management.